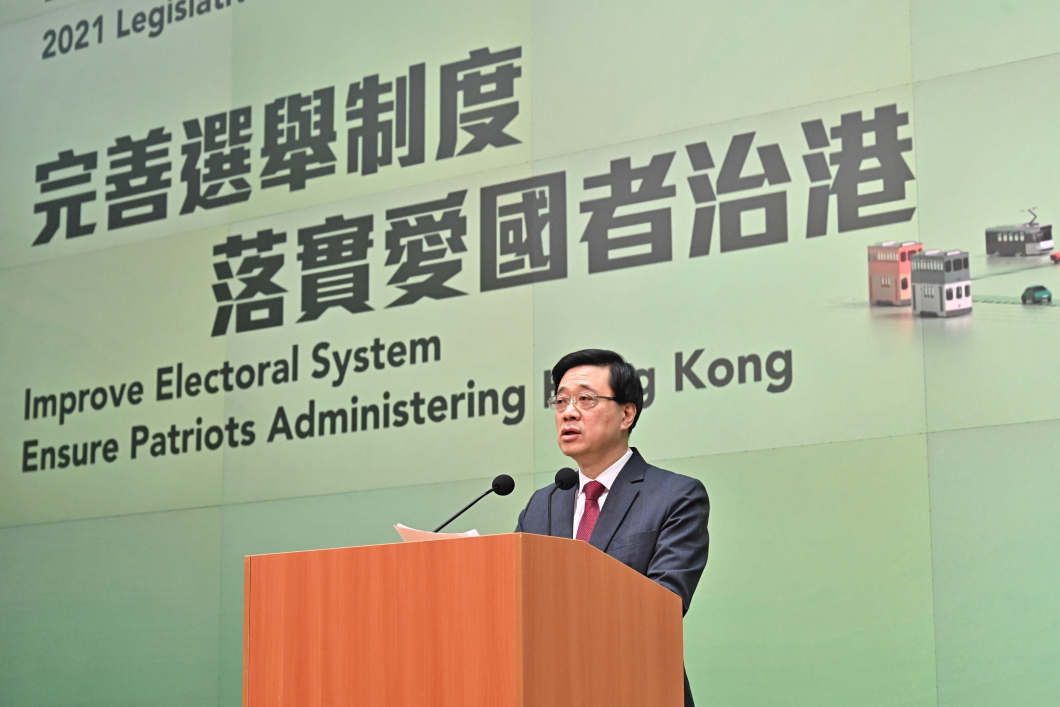 The seventh Legislative Council (LegCo) Election of the Hong Kong Special Administrative Region (HKSAR) will be held on December 19. This is the first LegCo Election held under the improved electoral system, whereby a total of 90 LegCo Members will be elected from the Election Committee constituency, functional constituencies and geographical constituencies, marking a significant milestone in the implementation of the principle of “patriots administering Hong Kong”.

The upcoming election, which reaps the benefits of broader representation and balanced participation brought by the electoral improvements, has the following features: (1) it is competitive and of quality; (2) it elects Members who will help build Hong Kong; and (3) it opens a new chapter of good administration and good governance.

(1)  An election that is competitive and of quality

Unlike previous elections where some candidates were returned uncontested, this is the first time in the history of LegCo General Election that all constituencies are contested by more than one candidate.

In the past when anti-China disruptors, who invariably opposed our country and government, ran in the elections, candidates would focus on political stance rather than serious discussions on election platforms and policy advocacies. It will not be the same in the upcoming election. With all candidates being patriotic, there will no longer be malicious smears and personal attacks. Instead, candidates articulate and debate head-to-head their election platforms in a bid to demonstrate their qualities and abilities.

The election campaign is no longer staged as a farce of personal attacks with just name-calling as in the past. We have even seen candidates from the Election Committee constituency taking part in joint canvassing with fellow contestants, a showcase of what it means to be a competitive and quality election.

(2)  Members to be elected will help build Hong Kong

The election has attracted elite candidates, including industry leaders and professionals, from various sectors of the community. There are political veterans and there are new faces as well. Some of them come from either the pro-establishment or non-pro-establishment camps, while some are independent candidates. Encompassing a wide political spectrum, this election is in no way “monotone” or “monochrome”. With patriotism as the common denominator, Members to be elected will help build Hong Kong. Traitors who miss no opportunity to make trouble, resist the Central Authorities and the Mainland, and collude with external forces will cease to exist among our law makers.

(3)  A new chapter of good administration and good governance

Over the past period of time, there were loopholes through which anti-China disruptors could get themselves elected to the LegCo, where they gave rise to disruptions for the purpose of impeding governance. Through the upcoming election, those who love the country and Hong Kong will be elected in accordance with the law and become part of the governing regime of the HKSAR. Hopefully, the LegCo will be freed from the chaos of endless internal conflicts, resistance against the Mainland as well as the Central Authorities, and the hijacking of “Two Systems” in opposition to “One Country”. When Members no longer expend their efforts in making troubles to the detriment of giving constructive input, the legislature will be able to monitor and maintain positive interaction with the executive. Together they will endeavour to improve people’s livelihood and develop the economy in the common interests of the country and Hong Kong, thereby opening a new chapter of good administration and good governance.

It is the common wish of the people of Hong Kong that the principle of “patriots administering Hong Kong” be implemented in the upcoming election to ensure the continued success of “One Country, Two Systems” as well as the city’s long-term prosperity and stability. December 19 marks a momentous day in Hong Kong’s history. I call on electors to cast their votes to elect Members who love our country and our city, who have the ability and integrity to work for the well-being of the people and who will faithfully fulfil their responsibilities.

Mindful of the community’s high expectations of this important election, the Government attaches substantial significance to it and will work tirelessly to make it a success.