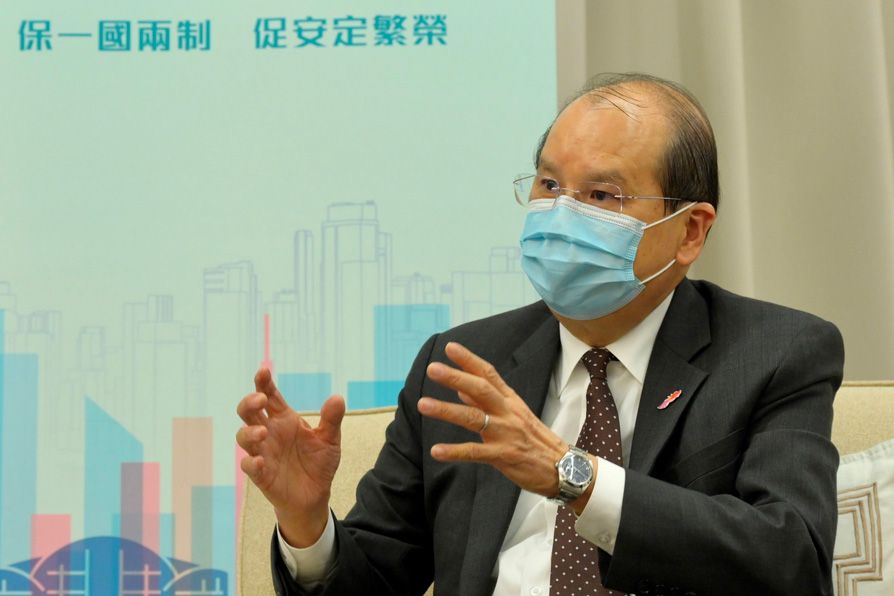 Epidemic control has been the first and foremost task of the HKSAR Government and remains a crucial key to reviving our economy. In order to gradually bring our city back to normality and restore people flow between Hong Kong and the Mainland as well as the rest of the world, the Government announced in mid-April a new direction in fighting COVID-19 by adjusting various anti-epidemic measures with "vaccine bubble" as the basis and appealing to citizens to get vaccinated without further ado. The European Union Member States have just decided to include Hong Kong in the travel "white list" and proposed to progressively lift their travel restrictions on Hong Kong residents. All these bear testament to the international recognition of our strenuous efforts in containing the epidemic.

Getting vaccinated sooner rather than later

"Vaccine bubble" is a trend gaining significant momentum worldwide and all countries are racing to get their people inoculated. The prevailing development tells that places with a higher vaccination rate are in a better position to resume social and economic activities. With the launch of the "Early Vaccination for All" campaign earlier this month, our vaccination programme is proceeding in full swing. I am pleased to learn that our bookings and vaccination rate are both on the rise, with a total of over 3.18 million doses of vaccines administered as at June 19.

A high vaccination rate is beneficial to our society and businesses. We call upon organisations and enterprises to encourage their staff to get vaccinated, and introduce vaccination leave and other facilitation measures where practicable. To take the lead, the Government offers its employees one day of vaccination leave or authorised absence for each dose received. Persons of target groups, including healthcare personnel, are also strongly advised to go for the jabs. As at the middle of this month, over 35 000 staff of the Hospital Authority received the first dose and the overall vaccination rate exceeded 41%.

The two vaccines provided by the Government fulfil the criteria of safety, efficacy and quality. It is only through "Early Vaccination for All" that Hong Kong can build an effective immune barrier and return to normalcy as soon as possible.

The first phase of social distancing measures under the "vaccine bubble" was introduced starting from April 29. Vaccinated citizens could enjoy not only better protection but also less stringent social distancing requirements. Since several local cases with unknown sources involving N501Y mutant strain were reported earlier this month, these measures will be maintained until June 23 to rein in any possible resurgence. Having regard to the epidemic situation, the progress of the vaccination programme and the implementation of the "vaccine bubble" measures, we will give serious consideration as to whether there is room for relaxing the social distancing measures. Details will be announced as soon as possible.

SIE Fund to help the poor and the wider community

Poverty alleviation is a policy priority of the Government and this area of work has been supported by the Commission on Poverty (CoP). At a CoP meeting held last Tuesday (June 15), members reviewed the work progress of the Social Innovation and Entrepreneurship Development Fund (SIE Fund). Administered by the CoP, the SIE Fund aims to promote social innovation and nurture social entrepreneurship as a means to alleviate poverty and social exclusion.

I am delighted that the SIE Fund has achieved substantial progress. It has allocated more than $470 million so far with over 2 100 innovative ideas incubated, around 7 000 social entrepreneurs nurtured, 304 projects funded and more than 280 000 people benefitted. Over 40% of these funded projects exploit technology in product development or service improvement. Among them, robotic glove system HandyRehab, upon successful development of its medical edition, has secured another round of funding to launch a home edition. With the aid of a mobile app, the robotic glove makes rehabilitation training easy for stroke patients at home. Another funded project is "Online and Home-based Robot for Autism Behavioral Intervention" (RABI), a robot-aided intervention programme for children with Autism Spectrum Disorder (ASD). Riding on the success of its predecessor in offering RABI services to non-governmental organisations and schools, the new programme extends its coverage to online and home-based services with a view to helping ASD children continue their learning during the epidemic.

The SIE Fund has also commissioned two flagship projects. The first one is "FOOD-CO", which is Hong Kong's first food support collaborative platform launched in 2017 to address the imbalance between the demand and supply of food support service. Integrating information technology with data analysis, the platform facilitates information sharing among food donors and supporting organisations through a mobile app and matches demand with supply to achieve higher effectiveness. The first two years saw increases in the number of food support service points from 161 to 352, the daily number of meals served to the underprivileged from about 33 000 to over 60 000, and the daily number of beneficiaries from about 15 000 to over 26 000. To further enhance the efficiency and effectiveness of food support service, the second stage of the project was rolled out in 2019 with new features including an automated one-stop logistics system, a one-stop volunteer recruitment and training platform and an artificial intelligence chat robot. To date, nearly 1 000 food support service points and food donors have been registered with "FOOD-CO" with over 8 000 food donation transactions completed, involving more than 1 200 tonnes of food with a total value of about $106 million.

The second flagship project under the SIE Fund is the "Gerontechnology Platform", which has been under preparation since January this year. The SIE Fund has engaged an intermediary to develop a platform for linking up different stakeholders on the demand and supply sides and enhance synergy by way of engagement, cross-sector partnership and collaboration. The goal is to foster the development and application of gerontechnology as a means to enhance the well-being, quality of life, independence and self-reliance of the elderly as well as providing support to their families, caregivers, healthcare staff and institutions. A temporary website of the platform will be launched within this month.

The SIE Fund previously engaged the University of Hong Kong to conduct a comprehensive performance review. The findings recognised that the Government has achieved policy innovation by serving as a "promoter" and "facilitator" through the SIE Fund. By facilitating cross-sector collaboration and leveraging on the social capital of intermediaries, the SIE Fund has supported social entrepreneurs, nurtured the ecosystem of social innovation and contributed to the alleviation of poverty and social exclusion. The research team selected 147 innovative projects/ventures that had reached a more advanced stage for social impact assessment. As at June last year, the total return generated by these projects/ventures was about $240 million, which is 4.5 times of the funding disbursed under the SIE Fund during the same period.

I hope that with the additional injection of $500 million from the Government in April this year, the SIE Fund will continue to serve as a catalyst for social innovation which may come up with innovative solutions to social problems, thereby benefitting more disadvantaged groups.

Poverty alleviation is an ongoing task that requires sustained determination, vision and strategic efforts. I believe that the SIE Fund will continue to support poverty alleviation in an innovative and flexible manner, and provide proper assistance for those in need.

With the implementation of the Law of the People's Republic of China on Safeguarding National Security in the HKSAR in the middle of last year, primary and secondary schools will follow the Education Bureau's guidelines on school administration and education to maintain a safe and orderly learning environment in schools and nurture students to become good law-abiding citizens. Schools can also introduce national security education progressively in a well-paced sequence based on the Curriculum Framework of National Security Education in Hong Kong.

The Government has been actively promoting Chinese history and culture with a view to enhancing national awareness and patriotism among young people. Since the 2018/19 school year, Chinese History has been made an independent compulsory subject at the junior secondary level. Starting from the coming 2021/22 school year, Citizenship and Social Development will be introduced as a new subject to replace Liberal Studies. About one-third of the curriculum encompasses the country's development since its reform and opening up with another one-third focusing on Hong Kong's development under "One Country, Two Systems". Apart from deepening students' knowledge of the historical development and vision of the country since its reform and opening up, the new curriculum enables students to learn more about national affairs and the country's close bond with our city, thereby boosting their sense of national identity. The rest of the curriculum gives a wider picture of the contemporary world with selected topics on economy, technology, sustainable development and public health. Students can broaden their horizons through an overview of the episodes facing mankind in the contemporary world. Mainland study opportunities also form an integral part of the curriculum, where students can gain a first-hand understanding of the country's current development and the lives of its people and cultivate their patriotic sentiments.

As disclosed in my previous blog, the "Be a Government Official for a Day" programme will be relaunched this summer holiday. Last week, I had a brief reunion with four former participants. Catching up with these young people was reminiscent of our first encounter. It seemed like only yesterday but two years have gone by and they are now pursuing studies in their favourite subjects at university. They shared the view that shadowing government officials on their job for a day was so much more than an enriching experience. Spending their time with the officials has also inspired them to think from different angles and set clear goals in life. I am really glad that this one-day programme has brought them not only fond memories but also pleasant changes for the better. I trust that these brilliant young people will go after their dreams and goals with courage and confidence. The "Be a Government Official for a Day" programme is now open for application. Secondary three to secondary six students please seize the opportunity and join us now.