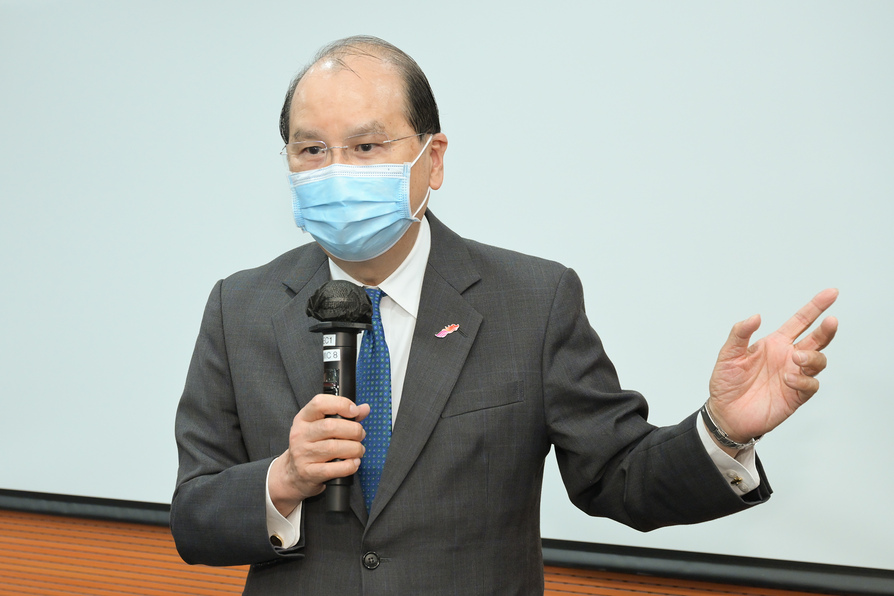 For civil servants, taking an oath or signing a declaration is an open acknowledgement of the acceptance and a genuine manifestation of their responsibilities and the expectations of them. The requirement also further safeguards and promotes the core values that should be upheld by civil servants, thereby ensuring effective governance of the HKSAR Government. This is a significant step to resolve problems at root and provide strong safeguards for the comprehensive implementation of “patriots administering Hong Kong”, which will in turn ensure the faithful application and robustness of “One Country, Two Systems” as well as the long-term prosperity and stability of Hong Kong.

Civil servants should bear in mind that under the Basic Law and the Civil Service Code, it has consistently been their duty to uphold the Basic Law, bear allegiance to the HKSAR, be dedicated to their duties and be responsible to the HKSAR Government. And the fact that this is politically ethical is beyond dispute. I must point out that it is an international practice to require civil servants to take an oath of allegiance to their country and be responsible to their government. Many countries have put in place institutional arrangements for oath-taking of civil servants.

Unity of knowledge and practice in discharging responsibilities

Let me highlight that whether before or after a civil servant has taken an oath or signed a declaration, the requirements stated therein have already been in existence. All civil servants should in no uncertain terms acknowledge and accept these duties. Shouldering the missions and duties of safeguarding national security, implementing “One Country, Two Systems” and maintaining Hong Kong’s prosperity and stability, they should ensure unity of knowledge and practice, strengthen their sense of responsibility and show courageous accountability in discharging responsibilities.

The HKSAR Government has always put emphasis on civil service training, in particular that on understanding the Constitution of the People’s Republic of China, the Basic Law and our country’s development, as well as that for enhancing leadership and managerial competencies. Through upgrading the training facilities and improving training programmes, we hope that civil servants will be better equipped to cope with various challenges in delivering public services and their capacities further optimised to provide better services and strive for excellence. 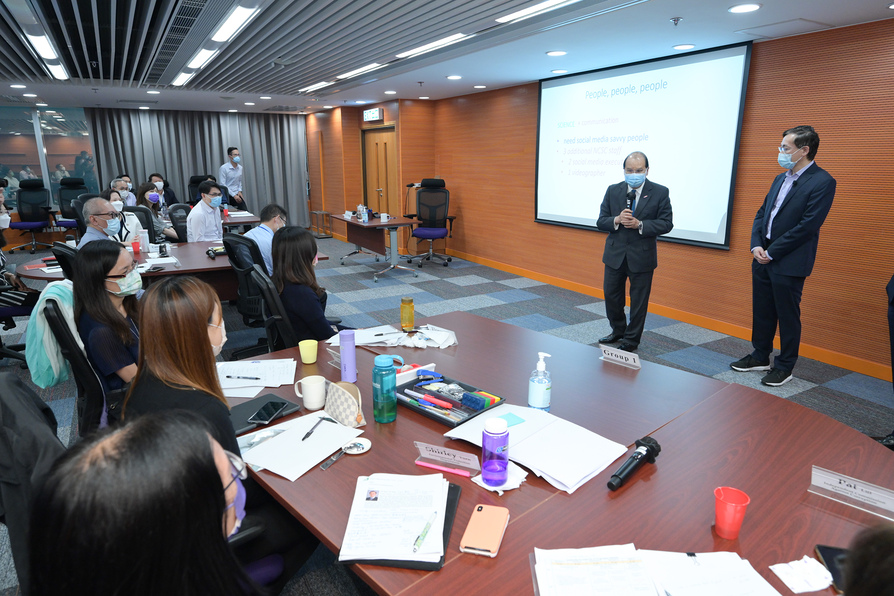 Establishment of the Civil Service College

Last Thursday (April 29), I visited the Civil Service Training and Development Institute (“CSTDI”) to learn about its work on the planning and preparation of training programmes. I also took the opportunity to exchange views with colleagues attending training there and encourage them to keep equipping and upgrading themselves.

I am particularly keen to follow the progress of the vigorous preparatory work for the Civil Service College (CSC). Scheduled for commissioning within 2021, the CSC is aimed to further enhance both the quality and quantity of civil service training. Upgrading work of the CSTDI’s existing facilities at the North Point Government Offices is underway for its ensuing use as interim accommodation for the CSC. In parallel, a site in Kwun Tong with an area of about 11 000 square metres has been identified for composite development, which will include the construction of the long-term accommodation for the CSC. Construction work of the composite development project is expected to commence in 2022 with an estimated phased completion starting from late 2026 depending on the actual work progress.

The Government is committed to providing better training for civil servants. In this connection, the Civil Service Training Advisory Board has been set up to give guidance on training programmes for the civil service and its long-term development strategy. Four key areas, namely national studies and the Basic Law, leadership development, application of innovation and technology, and international collaboration, are currently under the Board’s focused review.

The HKSAR Government attaches great importance to national studies training for civil servants. Among the various training areas, emphasis will be given to deepening their understanding of national affairs and the constitutional order of HKSAR.

The CSTDI organises national studies training programmes for civil servants at different levels to help them fully understand the HKSAR’s constitutional order established in accordance with the Constitution of the country and the Basic Law of Hong Kong under the principle of “One Country, Two Systems”. Apart from local programmes, there are also training, thematic visits and staff exchange programmes conducted on the Mainland for civil servants to gain first-hand experience of the country’s latest development and build their sense of national identity.

To further enhance national studies training, the CSTDI will increase the number of training places in the existing programmes jointly organised with the nine Mainland institutions. Staff exchange programmes between Hong Kong and the Mainland will also be extended to cover the Mainland municipalities in the Guangdong-Hong Kong-Macao Greater Bay Area. Contents of the thematic visits to these municipalities will be enriched from time to time as well.

At present, about 75% of directorate officers have attended training on the Mainland. With the increase in training places, it is our goal to have the percentage gradually raised to 100%.

The Mainland training, thematic visits and staff exchange programmes will provide our colleagues with first-hand experience of the country’s latest development and more opportunities to foster communication and mutual understanding with Mainland officers, thereby consolidating their sense of nation and national identity.

Efforts to enhance training for civil servants have never been put on hold, even during the epidemic. Some training programmes were delivered through live webcasts or video-recorded seminars, and a greater variety of multi-media learning resources have been made available on the Cyber Learning Centre Plus (CLC Plus) to encourage continuous learning with no limitations on time and place. This web-based learning portal recorded over 6.6 million page views in 2020, a substantial increase of 40% as compared with the previous year. In addition, the CSTDI has collaborated with the Tsinghua University since last December to launch the “Tsinghua Lecture Series” for middle and senior-level civil servants. These pre-recorded lectures on national policies and the latest development on the Mainland have been well received by colleagues.

As the backbone of the HKSAR Government, the civil service not only shoulders the significant duty of ensuring the faithful implementation of “One Country, Two Systems”, but also serves as a major pillar to assist the HKSAR Government in formulating and implementing various policies and measures. The establishment of the CSC will mark a new milestone in the training and development for civil servants. I would like to encourage fellow colleagues to keep abreast of the times through equipping themselves and render collaborative and unwavering support to the work of the HKSAR Government. 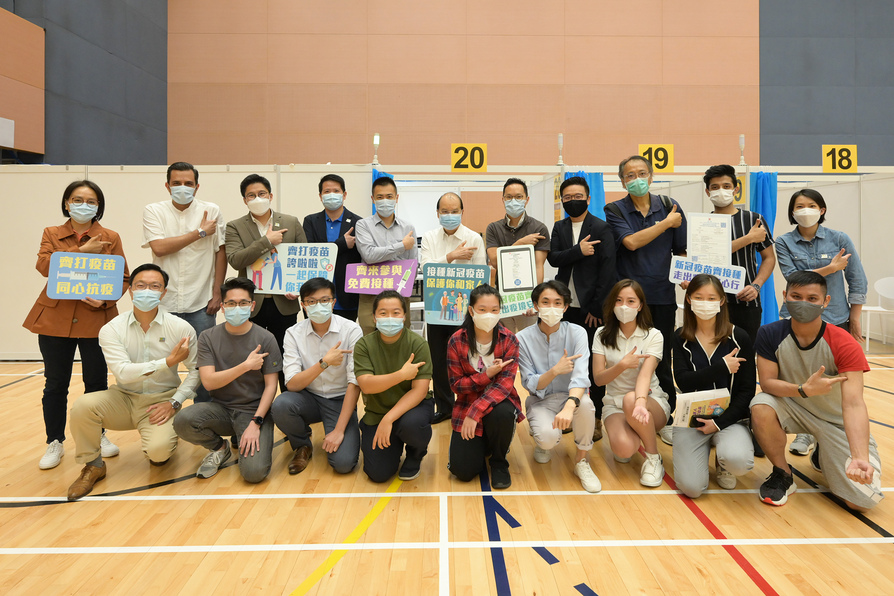 Get vaccinated as soon as possible

In the past year or so, the Government has adopted a multi-pronged approach to tackle the epidemic by strengthening anti-epidemic measures in a sustained manner and substantially improving the capabilities for combatting the disease in such areas as virus testing, quarantine and treatment facilities, manpower for case tracing and application of technology.

For Hong Kong to come through the epidemic, effective mass vaccination is the best way to go. The more people getting vaccinated, the greater the effectiveness of our anti-epidemic effort.

The COVID-19 Vaccination Programme (Vaccination Programme) has been expanded to cover persons aged 16 to 29. Last Thursday (April 29), I was joined by Vice Chairman Lau Ming-wai and several members of the Youth Development Commission to show support to the young people who got vaccinated at the Community Vaccination Centres at Sun Yat Sen Memorial Park Sports Centre and the Hong Kong Central Library. We also took the opportunity to call for more support for the Vaccination Programme.

New direction in fighting the epidemic

With Hong Kong’s enhanced anti-epidemic capabilities and the steady progress of the Vaccination Programme, the Government is taking a new direction in the fight against the epidemic by adjusting various social distancing measures on the basis of the “vaccine bubble”. The aim is to resume normal daily activities as soon as possible, as aspired by various trades and sectors as well as the general public.

The present epidemic situation in Hong Kong is largely under control but remains volatile. In response to the recent cases which involved foreign domestic helpers (FDHs) infected with COVID-19 mutant strains from unknown sources in the community, the HKSAR Government, after careful considerations, took a swift measure requesting all of the some 370 000 FDHs working in Hong Kong to undergo compulsory testing before May 9. Those who have already received their second dose of vaccine for at least 14 days will be exempted. This measure is aimed at protecting the health of the FDHs as well as their employers’ family (including the elderly and children), relatives and friends through the testing which will enable early identification of the source of the mutant strains, thereby cutting the transmission chains effectively. I hope that all FDHs working in Hong Kong and their employers will understand the Government’s intention. There is no discrimination on race or status as compulsory testing also applies to persons in other high-risk sectors, such as staff of residential care homes for the elderly, residential care homes for persons with disabilities and nursing homes.

Regarding the arrangement of requiring FDHs to receive authorised vaccines when applying for contract renewal in the future, the Labour Department and the Immigration Department are working out the relevant details.

I call upon all members of the public to remain vigilant and strictly observe anti-epidemic measures. Raising the vaccination rate on an on-going basis is not only a pre-requisite for the successful implementation of the “vaccine bubble”, but also a way out for Hong Kong to come through the epidemic. I earnestly urge all citizens to get vaccinated proactively as part of the concerted efforts to fight the epidemic.