Implement relief measures, stop filibustering and back on track

The Finance Committee of the Legislative Council (LegCo) approved the funding application of $137.5 billion for a new series of relief measures under the Anti-epidemic Fund (AEF) eight days ago, making up a total of nearly 60 measures worth $167.5 billion under two rounds of the AEF. The Government is implementing these measures at full steam to provide timely relief for people and businesses hard hit by the epidemic or the anti-epidemic measures.

Meanwhile, the LegCo resumed the Second Reading debate on the Appropriation Bill 2020 last Wednesday. The Government has proposed measures involving $120 billion in this year's Budget to safeguard jobs, support enterprises and relieve people's burden. I hope Members will address the pressing needs of the people by endorsing the Budget in the soonest possible time.

While the Government was pressing forward on livelihood and economic issues, the LegCo House Committee again failed to elect its Chairman and Deputy Chairman at its 16th meeting presided by Hon Dennis KWOK two days ago. Six months have been frittered away with no progress made. Obviously, some Members are manipulating the procedures, making every endeavour to obstruct the election with a view to paralysing the Committee. It is extremely exasperating and disappointing to see the scrutiny of so many bills held up and the Government's implementation of policies deliberately impeded. These Members' intention has manifested itself as they irresponsibly put the well-being of all Hong Kong people at stake.

According to Article 73 of the Basic Law, one of the LegCo's important functions is to enact laws. The House Committee serves an essential role in the LegCo's constitutional functions. It prepares for LegCo meetings, including deciding whether or not to set up bills committees for the scrutiny of bills submitted to LegCo.

The prolonged paralysis of the House Committee has resulted in its failure to handle bills and subsidiary legislation that are closely related to the economy and people's livelihood (such as extension of statutory maternity leave), thus gravely affecting LegCo's operation and performance of its constitutional functions. With its operation hindered, LegCo has deviated from its duties as prescribed under the Basic Law. LegCo members who have been filibustering maliciously are doing nothing but harm.

The current term of LegCo will end in a little more than three months. If filibustering continues, all the bills still under scrutiny by LegCo will lapse upon expiration of the term. Those filibustering members are not just disregarding public interests, but also severely wasting social resources. If the chaotic situation in LegCo continues, the political strategy of Mutually Assured Destruction will surely push Hong Kong down the drain. The shutdown of LegCo fails the expectation of Hong Kong people and damages the interests of Hong Kong. We cannot afford more internal conflicts. We should set things right and get the LegCo back to track as soon as possible.

In the past week, there were prejudiced comments and unreasonable accusations made by local and foreign politicians about the arrest by the Hong Kong Police of a number of persons for organising and participating in unauthorised assemblies as well as the related prosecution work of the Department of Justice (DoJ). I wish to point out that the investigations made by the Hong Kong Special Administrative Region (HKSAR) Government's law enforcement agencies and the prosecution work of the DoJ are carried out in strict accordance with the law. The DoJ's prosecutors have always been discharging their constitutional duty independently and professionally, without fear or favour. Prosecutorial decisions are based on an objective assessment of all admissible evidence and applicable laws and made strictly in accordance with the Prosecution Code, which is available to the public. No one, including foreign governments or parliamentarians, should meddle with the internal affairs of the HKSAR or attempt to interfere with DoJ's independent prosecutorial decisions.

The rule of law and judicial independence are the core values of Hong Kong. Any unfair and unfounded accusation is unacceptable and must be refuted.

As far as the epidemic is concerned, the daily number of new confirmed cases of Coronavirus Disease 2019 (COVID-19) has dropped to single digit recently and no new confirmed case was recorded for two days last week. This was attributable to the on-going anti-epidemic measures taken by the Government and concerted efforts of all Hong Kong people. Nevertheless, the situation can change very rapidly and the risk of community spread has not yet been defused.

Hence, the Government must remain vigilant even with fewer new confirmed cases. To safeguard against any sudden turn in the stabilised epidemic situation in Hong Kong, all the implemented requirements regarding catering business, scheduled premises and prohibition of group gathering have been extended by 14 days until May 7. However, the requirement for the number of customers in catering business premises at any one time not to exceed 50% of the normal seating capacity of the premises has been removed with effect from 0:00 am two days ago (April 24).

Some people have started to let down their guard against the epidemic recently. Though I can understand how people's daily lives have been greatly affected since the outbreak in late January, it is incumbent upon us to maintain vigilance so as not to render the anti-epidemic efforts futile lest the epidemic may run out of control. Notwithstanding the coming long weekend comprising the Birthday of the Buddha and the Labour Day, I would like to appeal to the public to go out less and avoid social activities such as meal or other gatherings to minimise the risk of cluster outbreaks in the community.

The epidemic is a severe challenge for humanity. Candidates sitting for the Hong Kong Diploma of Secondary Education Examination this year are not immune to this. The Examination started two days ago and I wish that candidates could face it with positivity and optimism in order to give their best. At the same time, the support and encouragement of families and friends is also very important for the candidates to know that they are not fighting alone. 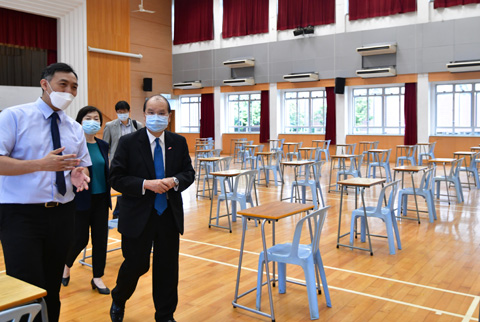 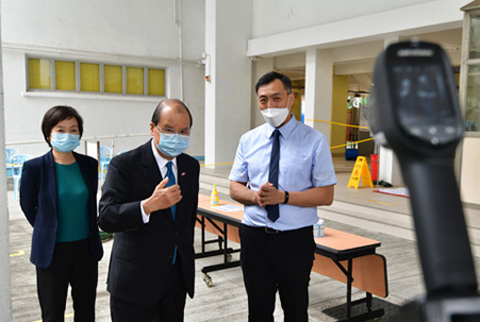 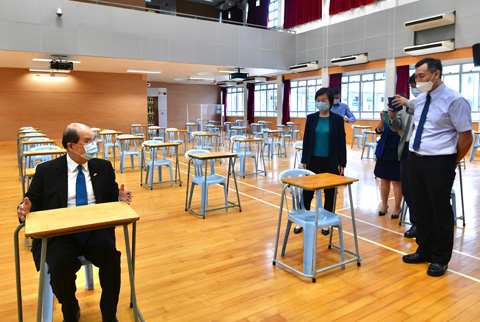 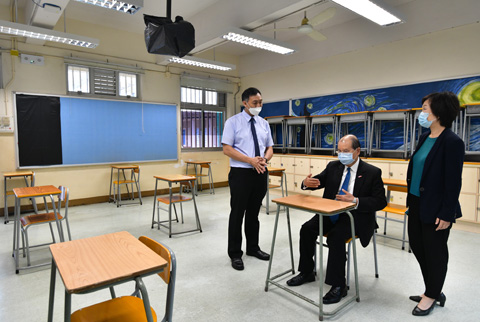 There are over 50 000 DSE candidates this year. Although the number of candidates has decreased in recent years, that of university places has not. It is the Government's policy to provide secondary school leavers with quality, diversified and flexible study pathways with multiple entry and exit points by promoting the parallel development of the publicly-funded and self-financing post-secondary education sectors. At present, we have about 23 000 undergraduate and 29 000 sub-degree places, i.e. some 52 000 full-time locally accredited post-secondary places in total. There are sufficient publicly-funded and self-financing first-year first-degree places to cater for the needs of all Secondary Six students meeting the minimum entrance requirements. Moreover, quite a number of institutions provide Diploma Yi Jin as well as other vocational and professional education and training. Hence, there will be sufficient places for eligible students to pursue their studies in Hong Kong. Without having to worry about securing a place for further studies, candidates should choose study and career pathways that best suit their interests, needs and abilities.

In times of adversity, like during an epidemic, it is very important that we maintain a sound psychological state and good mental health. It is only with determination and a positive mind that we could overcome all kinds of difficulties. Public examination is only one of the stops in our voyage of life. Let us cheer on the DSE takers and encourage them to be enthusiastic and positive in going all out for the Examination and for their challenging and rewarding life journeys.